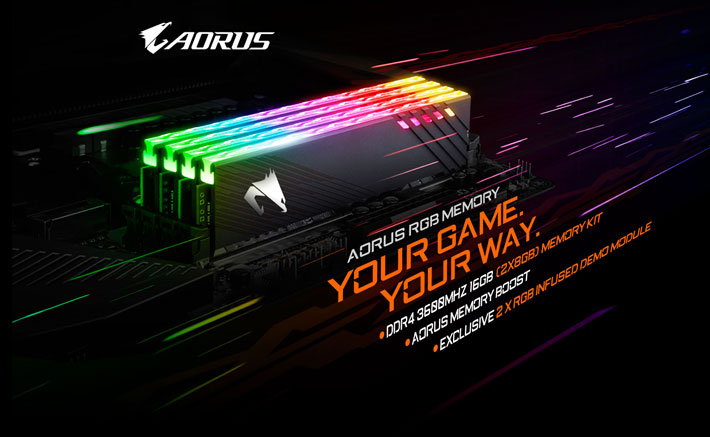 To address this demand for faster memory frequencies and overall performance, AORUS RGB MEMORY 16GB 3600MHz supports the GIGABYTE exclusive AORUS Memory Boost function. With AORUS Z390, X570 motherboards, and XMP enabled on the new BIOS, users can activate the Memory Boost function and boost their memory frequencies to 3733 MHz without tweaking the timings. This allows for a 4% increase in read/write performance without overclocking so users don’t have to spend extra to buy XMP 3733 MHz memory but spend it on peripherals instead to build a more powerful system that also suits the user’s budget.

A fan and critics’ favorite from the first generation memory kit, the patented RGB dummy modules are back again in full force and enable users to fill out their memory configuration with the added effects of impressive RGB lighting. Users won’t have to spend an extravagant amount to buy extra memory kits to fill out their memory configuration as they have 2x RGB memory modules and 2x RGB dummy modules for their DIMM slots. Those who want higher-capacity memory can also get 32GB capacity memory to upgrade their overall memory performance.

Supporting the original design for RGB lighting, AORUS RGB MEMORY 16GB 3600MHz takes it up a notch and offers 12 digital LEDs for a more fluid and robust lighting display. Exclusive lighting strips and effects illuminate the AORUS design patterns to give the memory sticks a more vivid but not too sharp lighting glow. By using the GIGABYTE exclusive RGB Fusion App, users can synchronize their components with the RGB lighting effects and play around with the various lighting modes including the new rainbow lighting mode too add more diverse lighting patterns to their system. With the customization of RGB lighting offered, users can showcase their own RGB style with the impressive lighting on their PC components, highlighted by the RGB memory lighting. How a Motherboard is made: Inside the Gigabyte Factory in Taiwan